Two-and-a-half years ago, quite unplanned, I became a dad.

My girlfriend Tina’s pregnancy was the shocker. But, after nine months of heated dialogue on the questionable reliability of Mexican condoms, a little light reading on how to be a parent, plenty of obsessive worrying and a summer-long pub-crawl, I finally felt ready for parenthood.

He resembled Yoda: bald with pickled purplish skin that looked, well, as if it had been marinating in amniotic fluid for nearly a year.

I was coddling this blotchy raisin when he opened his eyes for the first time. So the first thing he looked upon in this world was my smiling face, a genuine expression but one that belied the loudest of a million thoughts roaring through my mind: I am not ready for parenthood.

No matter. My son returned the smile and we were one, a bubble almost immediately burst by the realization that it was actually a wince signaling the inaugural dropping of the deuce.

Times have changed faster than that first diaper.

But the panic passed. Then I lost my job. Then Tina and I broke up.

A friend once told me that having a dog is “good training” for having a kid. Well, I’ve had a dog and, while trailing behind an incontinent puppy in the middle of a frigid winter night isn’t everybody’s idea of a good time, his days consisted mostly of sleep with short bursts of taking it easy.

The truth is, being a parent is hard. And being a single parent is twice as difficult. Mathematically, it’s the same amount of work divided by one less person.

Shared custody, however, has some benefits. I like having the flexibility to pursue other things that I’m passionate about. Like work. Freelance writing also provides some latitude and, occasionally, even enough money to live.

The hardest thing about being a parent is avoiding other parents. Especially the ones whose kids are the smartest, most attractive, athletic humans to ever grace the planet, certainly direct descendents of superior bloodlines and beneficiaries of an enlightened parenting technique taught by an Indian yogi during a first-trimester Lamaze expedition to the Himalayas.

Nothing can teach you how to be a good dad. Not even the Internet. Although access to that certainly helps when trying to establish if it’s fatal to ingest a colony of ants.

Demonstrably, some take to it more gracefully than others. (This can actually be said for parenting, accessing the Internet and ingesting ants.) I’ve been told that I’m a good dad. Usually, this comes from people who don’t have children. I always insist it’s because I once had a dog.

I’m not perfect. Once, some seemingly harmless horseplay came to an apoplectic halt after my son landed awkwardly on the bed, burst into tears then fainted in my arms. Misdiagnosing him as dead, I instinctively applied an ad hoc version of the after-school cardiopulmonary-resuscitation protocol taught to me in the fall of 1983. Happily, he woke up. So the situation was arguably well in hand by the time eight firefighters and two paramedics burst into my apartment several minutes later.

Perhaps not surprisingly, London’s first two words were “Oh no!” He utters it out of genuine concern, like after his gravity defying vomit arcs over the table and somehow finds its way into my mouth.

He’s not a big talker, though his choice words are nuanced. Various intonations of “Dada”, for example, can mean pick me up, get me some milk, pick up that thing I dropped, put on a DVD, hurry up, and, his greatest hit, this is going to mean trouble.

He’s incredibly literal: a train is a “choo choo”. He got a Thomas & Friends table train set for Christmas that features more than 100 pieces. For the record, that’s more than 100 reasons not to buy one for your own child. A fire engine – or anything with a siren – is a “woo woo”. So when he sees an ambulance racing down the street he simply does the math: “Woo woo! Dada! Oh no!”

He is the best-looking boy-genius of his generation.

This may have gone to his head. He does not appreciate getting his blond hair brushed or cut and until recently resembled a professional yodeler.

He’s an inconsiderate roommate: loud, moody, demanding, prone to tantrums and never forthcoming when it comes to bucking up for rent.

Navigating our apartment – now a minefield of trucks, tapes and talking books – is perilous, once-prized hardwood barely visible beneath the toys.

Want to go out? Welcome to the Sherpa years. Suddenly, it takes an hour’s prep and expedition-sized baggage just to bivouac at a local restaurant. Once base camp is established, the forecast might call for some drooling, sobbing and even a slight chance of puke. Count on at least one tossed sippy cup and a couple of dirty looks, too. Much like babysitting a drunk, you just need to hold on until they pass out.

Of course, you just can’t pop a kid in a cab and hope for the best. Especially when the contents of your wallet 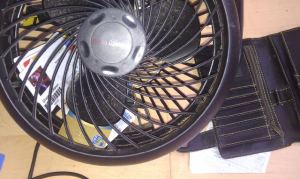 were stuffed through the protective grate of a desk fan several hours earlier without your knowledge. “Dada,” my son said after we’d retreated home to retrieve it. “Sawrry.”

“Becoming a father is easy enough, but being one can be very rough,” poet Wilhelm Busch observed.” It’s not unlike golf. People who don’t play will never understand its allure; those who do can’t fathom life before it, even though it occasionally frustrates the hell out of them. Nobody’s perfect. Even pros slice the ball off the fairway, once in a while. Don’t take a stroke. Just remember how great 18 holes can look when recounted over cocktails in the clubhouse.

Make mine a screwdriver, good sir.

Original essay by Graeme McRanor appeared in the Globe and Mail.